Ludmila and Yuri Anisimov came from Russia, where they grew up and received their education. They both finished a specialized music school for talented kids, and at age 15 they both began their studies at the Krasnodar music college, where they met. Ludmila then continued her education in Moscow, and Yuri in Astrakhan, Russia.Ludmila and Yuri possess unique pedagogical experience: they both taught for 23 years at a specialized music school in Russia, where they were certified in the highest pedagogical category. In 1990 Ludmila became a recipient of an award from the Russian Ministry of Culture.
In the 1990’s, Ludmila and Yuri, along with some of their students, came to the United States twice through a cultural exchange program. They gave
dozens of performances including venues like the University of Florida (Gainesville and Tampa campuses), Eckerd College (St. Petersburg, FL), Bradley Center (Milwaukee, WI), Six Flags Great America (Gurnee, IL), as well as many schools and churches. In addition to their performances, they also gave master classes.
During the 20 years of their residency in the United States, Ludmila and Yuri worked for 8 years at private schools, and 11 years at Carroll College (now Carroll University). In 2008, they received an award from Carroll’s Project Create / Carroll Academy “In Recognition of Your Dedication and Commitment fo Students in Our String Program”. This year, Ludmila and Yuri are celebrating a 10‐year anniversary of teaching at the WCCM.
Here in America, Ludmila and Yuri also founded an ensemble Strings of the Heart, which has performed hundreds of concerts to a wide variety of audiences, including the 1998 reception of the Governors of the United States in Milwaukee. They have also recorded four albums: Stained Glass, Heavenly Blessing, Streams of Love, and My Little Star. Yuri arranges all the music for the group’s concerts and recordings.
Ludmila and Yuri are very proud of their former students, who have dedicated their professional lives to music, and teach and perform throughout the world. Many of them reside throughout the different regions in Russia, as well as Norway, Netherlands, Germany and the United States.
Ludmila and Yuri are knowledgeable, passionate, caring, respectful and dedicated to their students. They welcome new students of any age or level. 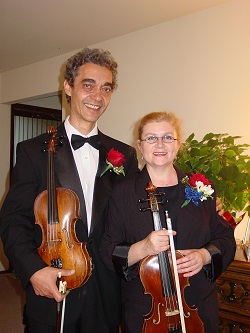