Pete is a familiar face in the Midwest Music Scene. He has been nominated and won seven WAMI Awards, including Best Guitarist, Best Original Band, Best Jazz Group, and Best R&B Group. You have seen him perform at all the major Milwakee festivals, opening for many national acts, including Chicago, Pat Benatar, and INXS.

He has released ten CDs of original material that includes his performance on guitar, bass, keyboards, and looping. He has been featured on 25 other CDs from various artists, and his playing has been heard on 14 MTV Sports commercials, and over 100 Wisconsin-Area television & radio commercials. You may have also seen him at the Bradley Center, performing over a period of 23 years as the staff guitarists for "The Bucks Band" Streetlife. He is currently a member of Uprising, Peter Mac & The Fighting Fish, and is hired to work with groups in all different genres of music throughout the Milwaukee Area and beyond.

With over 30 years of teaching experience, his students range in age from 5 to 65. His students have achieved success in the music industry, some with full rides to Berklee School of Music, and many are now performing and teaching all over the U.S.

His philosophy on teaching is a nurturing approach, encouraging the creative growth of his students. Course of study is based on the interests of the individual, an on the acquisition of skills identified to reach the specific goals of the individual student, as well as goals recommended by the teacher.

He received his formal education at the Wisconsin Conservatory of Music and Marquette University.

Please  visit  www.AboutPeterMac.com for more information or send him an e-mail at  Petermacguitarlab@gmail.com . 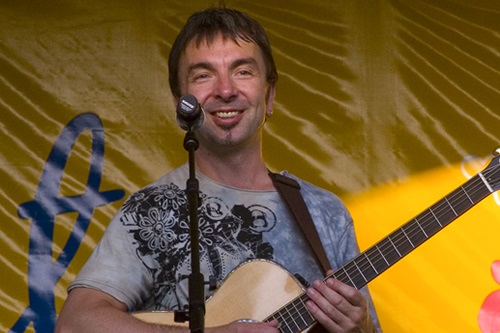