Career:
Dave has had the pleasure of working with the legendary Jethro Tull guitarist Martin Barre. He toured with The Martin Barre Band in 2017 and 2018 and appears on his Live At The Factory Underground album released in 2019. Since 2002 he has been the active drummer for The Willy Porter Band with three critically acclaimed albums to his credit and being Willy’s fulltime touring drummer. One of his latest and most exciting projects is the funk and soul band Tweed featuring some of Milwaukee’s finest musicians. Over the past 30 years, Dave has made numerous television and radio appearances featuring his drumming as well as extensive touring in North America and Europe featuring numerus projects all with various styles of music.
Dave’s solo projects, Drums On Low and Tessellated Resonance, have received acclaimed reviews from Modern Drummer, Recording Magazine, and numerous global on-line music critics. The 400Th issue of Recording Magazine includes a multi-page feature of Dave’s process of writing and recording Drums On Low. Along with his independent work, he heads up an improvisational recording project called Blank Radio. As the chief engineer and the curator of hundreds of sessions with musicians, the goal of Blank Radio is to create free flowing music in real time.

Teaching has always been one of Dave’s great joys in life and has been for over 25 years. He loves sharing his enthusiasm, experience, knowledge, history of percussion and the music world through vast first-hand knowledge. Dave is a firm believer in the person, not “natural ability” and feels that goals can be met with dedication and consistent effort. He is committed to tailoring a lesson plan for each student so that you can work at a pace that is right for you and your aspirations. Many former students have received degrees in music and have gone on to careers in music. Even with all that, the most important goal is to have some fun!
​
Here are some noteworthy highlights and milestones:
· 50 plus albums and recording credits
· Instructional Projects for the Hal Leonard Corp.
· Multiple WAMI Awards including Best Drummer
· Member of the Vic Firth Teaching Network
· Endorsements with Yamaha Drums and Paiste Cymbals
· Coached drumlines for Kettle Moraine, West Bend, and WI Lutheran High Schools
· Charter member of the D.I. G.- Drum Instructors Guild 1995-2007
· Multiple Drum Clinics with fellow clinicians: Ed Thgpen, Paul Wertico, Greg Bissonette,
Dom Famularo, Ernie Adams, and Carmine Appice 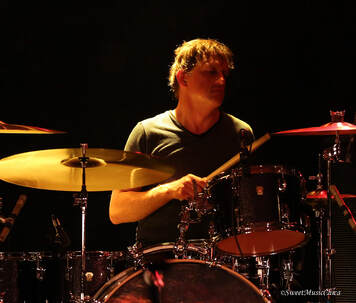